Flyball is a high speed sport in which two teams of four dogs  and their handlers compete relay-style against each other and the clock (the fastest teams in the country can run all four dogs in under 16 seconds!)

The flyball course is made up of two side-by-side lanes, each 51 feet long, comprising 4 jumps.  At the start line there is an electronic timer (recording times to 1/100 second) and at the other end of each lane there is a flyball box, which when triggered by the dog, releases a tennis ball. 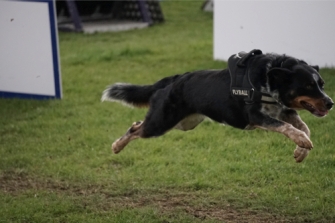 The first dog must run up the lane over the jumps, trigger the box, collect the tennis ball and return over the jumps. Once it crosses the start line, the next dog is released to similarly retrieve his ball and so on with the third and fourth dog.  If a dog makes an error (drops the ball, misses a jump or fails to trigger the box),  it must run the course again at the end. The first team to have all four dogs complete the course wins the leg.

A race is usually run as the best of five legs.  Teams race against other teams in their division.  Divisions ensure that you always race against teams of a similar ability.